Here’s part 1: W is for Wonderland Trail in Washington and I will share more pictures soon! 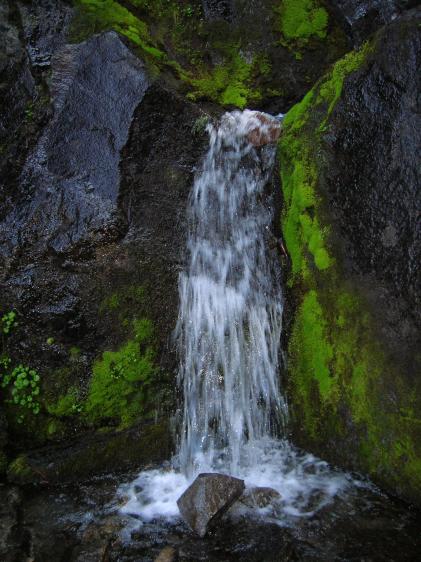 I will admit the first step on a new trail sends exhilaration through my heart. The knowledge of civilization far off in the distance but not infringing on life in the moment, the test of survival in both physical and mental aspects, and the tiny bit of excitement to see what will happen on this journey all play through my thoughts when my feet hit that first stretch.

It dies soon after. Then the steep hills come, physical exhaustion settles like a damp blanket, and forty-five pound backpacks seem to carry much more than necessary. Camp sounded like sanctuary after about the first half hour of hiking. That is, until we got to camp. Our first campsite was called Devil’s Dream, and rightly so. The mosquitoes were so thick there that they had started to form small black buzzing clouds. Previously we had been hiking in shorts and T-Shirts, but we quickly donned wind pants, long sleeves, hats and bandannas to cover as much exposed flesh as possible. There was only one other person there, and she was wearing what looked to me like something a bee keeper might wear. Needless to say that first day was completely miserable and I lost track of how many times I would repeat, “I’m never hiking another trail again.”

The second day did not get any better. It was our longest day mileage wise and the weather was worse than the day before. I struggled to maintain positive and it worked for most of the day. However, descending one of the side mountains was my own downfall. My constant chatter slowly ebbed to be replaced with chattering of teeth. This was the day of cold, as I remember it. The day when I was defeated by the weather and thankfully had my family there to rescue me.

That cold I had experienced I now classify as ultimate conditioning. Since it was only the second day none of us had turned hardened backpackers, except maybe my dad since he seems born that way. When we started out in the morning we all wore t-shirts which everyone soon exchanged for long sleeves, except for me. I waited until orange spots like splashes of tangerine watercolor had started forming on my legs and arms which my brother identified as a “really bad sign.”

Once we hiked past tree level we entered masses of ice laced clouds. Their normal fluffy, friendly appearance crashed into my face, encasing my skin in a blanket of frozen moisture. Not only that, but we were hiking through snow fields, our feet barely clinging to the edge of the mountain. Death stared up at me from the dagger-like rocks below, mocking my foolishness to actually believe I could backpack. There wasn’t much I could do at that point except admit defeat and succumb to the overwhelming power of nature.

In retrospect, I think it was good that the worst happened on the first days of the hike because it conditioned our minds and bodies for the rest of the trail. What most people don’t realize about backpacking is that it is just as much mental exercise as physical. It’s a miracle I had the will to get up that third day and continue hiking even though the night before I thought I could be dying. I realized I would have to exchange my motto of “I’m never hiking again” to “I’m never giving up.” Even the strongest man may not be able to handle a journey out into the wilderness. Nature has the power to defeat and it will.

Although that wasn’t the last day it rained the rest of the trail was considerably dryer and, true to the man’s word, Box Canyon had not a drop of rain. This was especially lucky because farther into the trail is when the real beauty appears. The clearer the sky, the more to see. Not that wild flowers or animals weren’t something to behold, but they don’t strike awe like a mighty glacier or the breathtaking Mt. Rainier itself.

There’s something about mountains that is so moving it’s hard to describe. The sheer mass of them jutting into the sky like kings of the world. Mt. Rainier, the name has the echoes of power dusting off of it, the name that created my trip of a lifetime.

On the last day on the trail I remember thinking of two things. One, and most important, was how much food I wanted to devour, and the other, the wonder of the mighty volcano I had just traveled around. No more physical exertion, I was fit and traveled the paths with an air of experience and courage. After competing for my life with early stages of hypothermia I felt ready for anything. I spoke of possible trails we could hike on our next adventure and I thought what else exists in this world that I have never seen? What else holds beauty to which you can find no words to describe? I wanted to experience everything again in that moment, but all I could manage was one trip back in my memory of the first time I saw the mountain.

It rose into view, like pride steaming off a victorious leader, ice capped top touching the sky in a truce to behave its dormant interior. The mountain was a giant, intimidating and fierce. Mt. Rainier looked down on my family, looked down on me, and did nothing about it. We were truly insignificant in that moment, nonexistent to the world, invincible to time. Here I was, standing on top of the world, and no one knew it but my family and me. No one cared what I was doing at that moment, staring Power right in the face, and therefore no one could tell me that what I was doing was not okay, not right, not following the rules they decided were wise and just. In that insignificance I felt the beauty in life. I felt my first taste of freedom.

12 thoughts on “Walking in Wonderland”