Garfield truly deserves his namesake. He is a massive 21 lb orange Maine Coon mix that loves affection and eating food. He is smart and lazy and uses his intelligence to assist in his laziness. Above all, Garfield is persistent. It’s a quality I have grown to admire and delight in watching him display.

Garfield was adopted with his sister Elphaba (who I will write about next) when they were just a few weeks old. They were abandoned in a barn and my sister’s friend was trying to find good homes for them. My sister has always loved the cartoon Garfield, it was her favorite all through childhood, so when she saw this little orange fluffball needed a home she could not say no. Garfield quickly melted the hearts of all who came in contact with him. He was deeply affectionate and loved cuddles. His personality was only aided by his undeniable cuteness. As he grew older we began to witness some of his most entertaining quirks in development.

First of all, no amount of attention was ever enough. Garfield needed a way to solve this dilemma and somehow knew meowing endlessly was not the way to go about it. He observed the way people interacted, standing on two feet, and decided to try it out himself. Typically, when he stands on two feet this is enough to get a few pets, but when even that novelty wears off Garfield will gently paw the person he seeks attention from. As if he is petting them to let them know they can now return the favor. When that person has exhausted their potential he will simply move on to the next candidate and begin to tenderly paw at them until they comply with his wishes. Gentle paw not doing the trick? He will literally grab your hand with his two paws and pull it down to his body. Persistence.

Garfield and Elphaba share their food and water bowls, but sometimes Garfield doesn’t want to share. If they are both going to eat at the same time he will take his paw and pull the bowl away from Elphaba and begin eating. Sure enough, Elphaba will pause as if to ask herself, “Why did that bowl just move?”, and then she will move forward and push Garfield out of the way. He then will patiently pull the bowl farther from her and begin to eat again. This process will continue until his hunger and taunting has been satisfied. Then he will move onto another activity.

One activity he enjoys is chasing light. This is a game that he WILL NOT stop. You always have to be the one to stop it. I’m not sure what it is about this game in particular, but once he gets his sight on a beam of light, there’s no stopping his chasing until the light has completely disappeared. He does not care that his paw touches where the light is at least a dozen times, he does not care that no matter how many times he’s played this game he’s never actually “caught” the light… he will not give up.

Garfield is a cat who enjoys the simple pleasures in life: attention, food, taunting his sister, and chasing light. He knows what he likes and he goes after it without any hesitation, guilt, or second-guessing. Not only does he endlessly entertain me, but he has proven what a powerful trait persistence really is.

Check out my other  Life Lessons From Furry Friends posts here!:

It’s been a long time since I’ve posted one of these, and that’s because Scott stumped me and I refused to go out of order! The original idea was that I would pick one lesson from each pet I have owned. I just could not decide what lesson to pluck from living with Scott. I thought maybe humor because he was such a funny character he always made everyone laugh. Now, I’d just like to tell his story, and maybe by the end I’ll narrow down one word like forgiveness or patience (from part 1 and 2)…and maybe I won’t. :p

END_OF_DOCUMENT_TOKEN_TO_BE_REPLACED 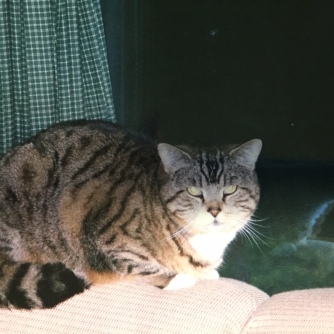 Neither Tiger nor Fluffy really matched their names. Tiger just barely had a touch of orange and the occasional black stripe whereas Fluffy was just clearly not fluffy in any way. We got these two cats as kittens together when my siblings and I were very young. They were the first baby animals we ever had to care for and that became apparent when my sister and I thought we’d try a little science experiment with them.